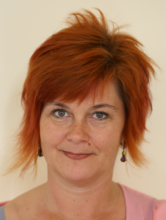 She has been working in KÁTKI since 1994 and since 1998 she does so as a chief research fellow. Her present field of research is the manipulation of embryonic cells, as well as deep freezing and use of such cells in in vitro gene conservation. Her former research topics were related to cytogenetics, embryology and fish biology. She is scientific supervisor of a full-time PhD student. As a visiting lecturer she contributes to the BSc training at Szent István University in the optional subject of “Fish biotechnology: Genome manipulations of fish”. She was scientific part-supervisor in the bilateral French-Hungarian project titled “Development and use of biotechnological methods in the reproductive biology of poultry for the conservation of genetic diversity (2010-2013)”. She was the scientific supervisor of the KTIA_AIK_12-1-2013-0002: project titled “Elaboration of alternative biotechnological methods for development of the Hungarian in vitro poultry and rabbit gene bank.